I wanted to change the storage arrangements I had for the Jeep that would also allow for us to sleep in the rear.  I have done it before by folding down the seats, but wanted something a little more practical for us and would allow us to sleep and store items.   I have seen several others construct similar, and Goose Gear makes a nice deck, but their’s doesn’t have storage underneath, so I knew this would be a one-off design.  I had two Black Forest sliders in the rear for our cooler and other storage prior to all this. First up was to remove all of this – the sliders and base plate.  I am planning to leave the interior cargo rack that I have the shovel and axe mounted too.  I typically have two folding chairs, and a folding table that I keep on there as well. 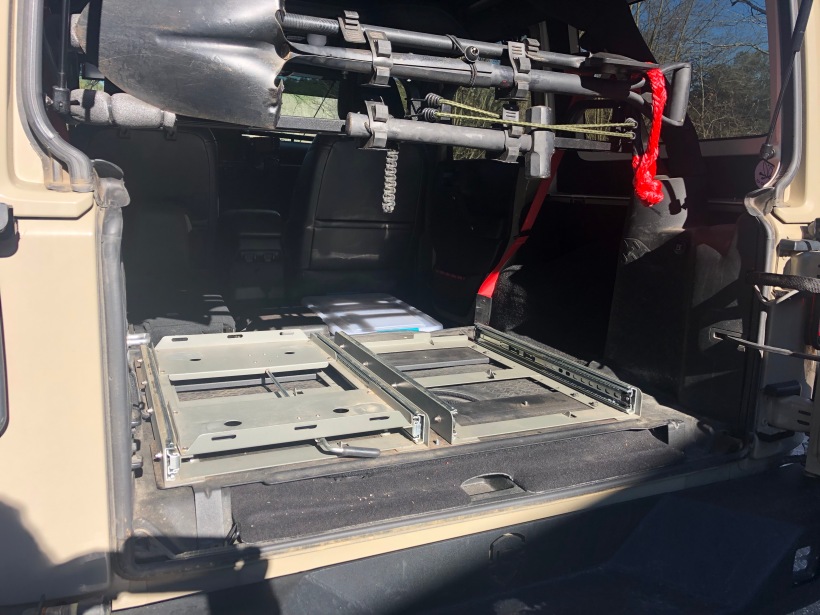 I also removed the 60 split seat in the rear, since we rarely ever had anyone else with us.  I did retain the 40 split just in case we ever have a third person.   I did use Goose Gear’s 60% seat delete bracket for this part. 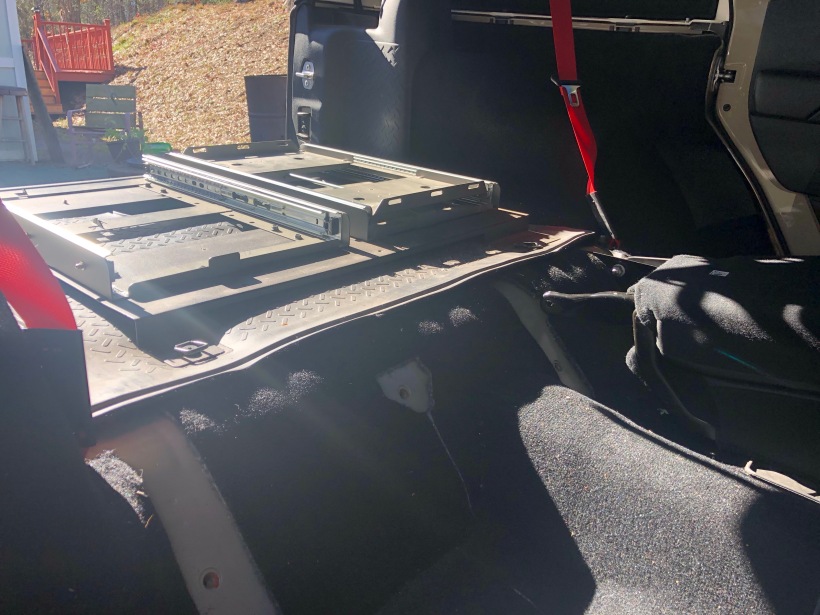 Next up was to build a base for the sleeping platform.  I wanted it modular so that I could remove it, and would allow for the third seat, and storage underneath. Those are 1 x 8’s so the deck will sit 8 inches from the floor in the rear, and 15 to 18 towards the rear passenger floorboard area. 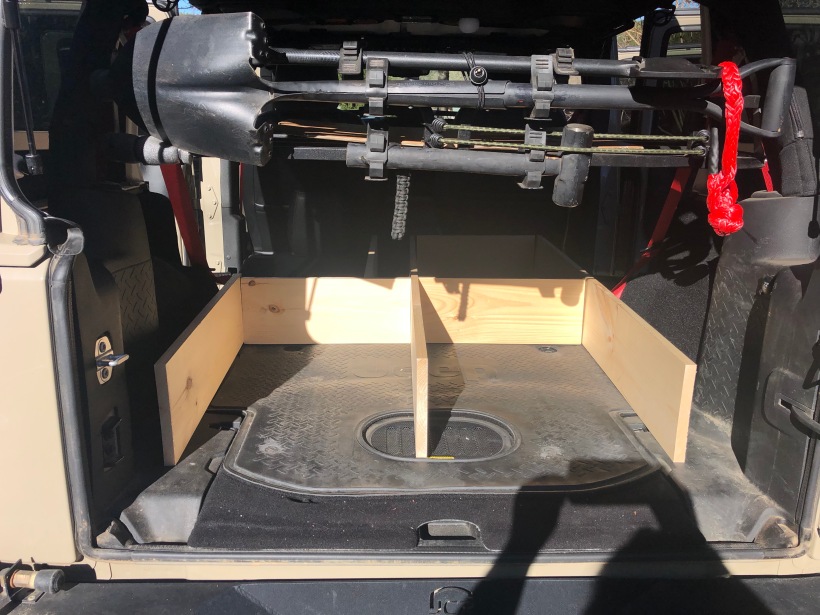 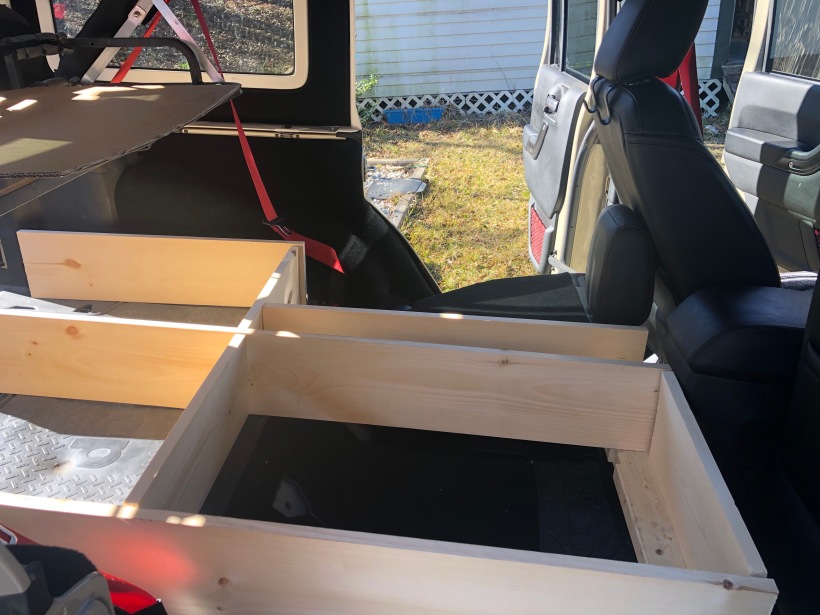 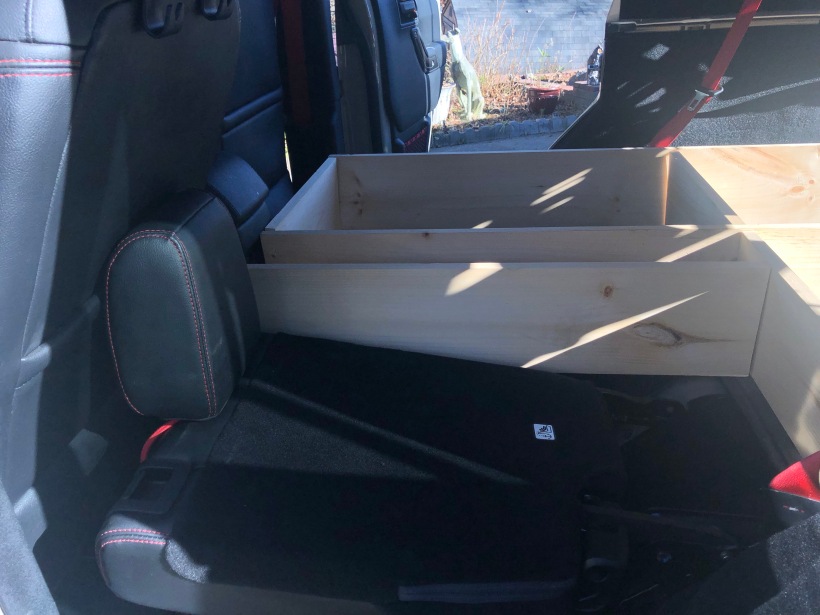 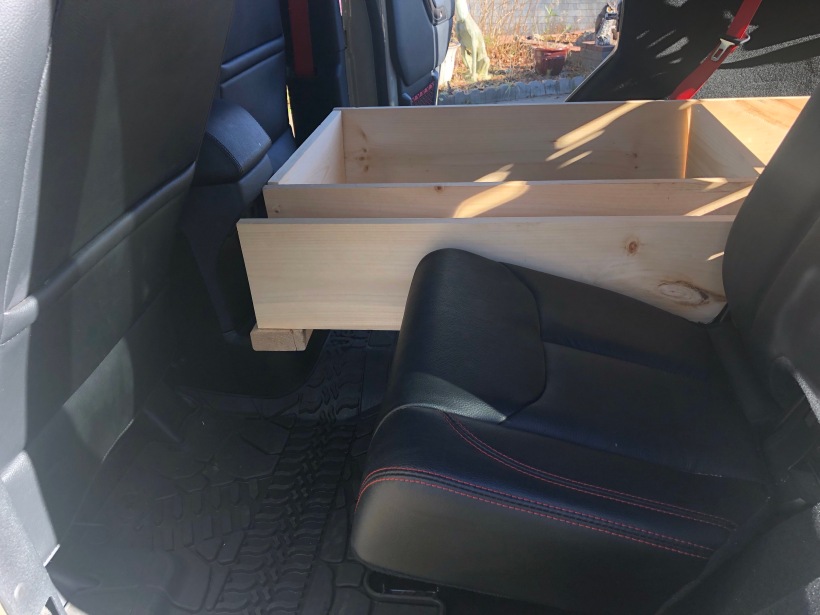 Next up was to start laying out the deck.  Again, I wanted it in sections to allow for the third seat and storage. Piano hinges connected the sections that were needed to be accessible. 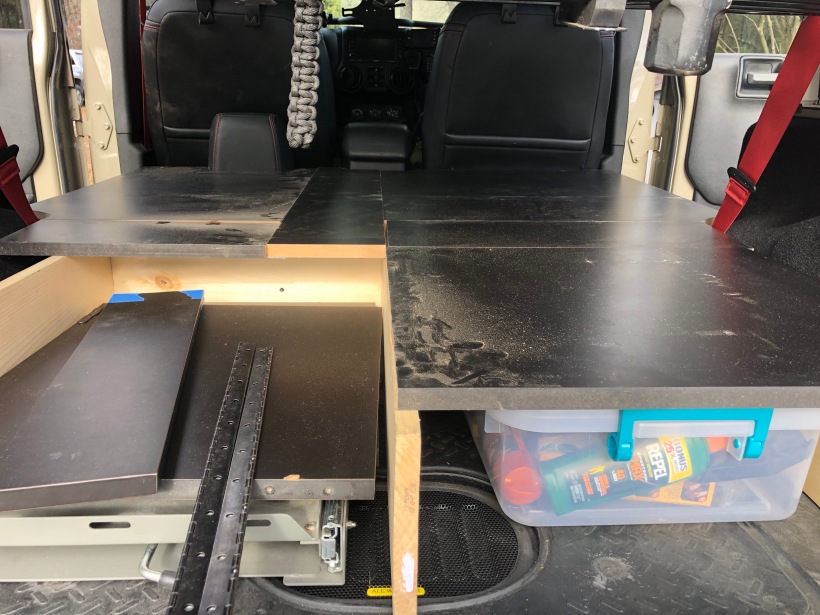 I also wanted to maximize the sleeping area, so I positioned the front seats in our normal riding position, and cut the decking to match.  Notches for the third seat headrest and center console were cut out. 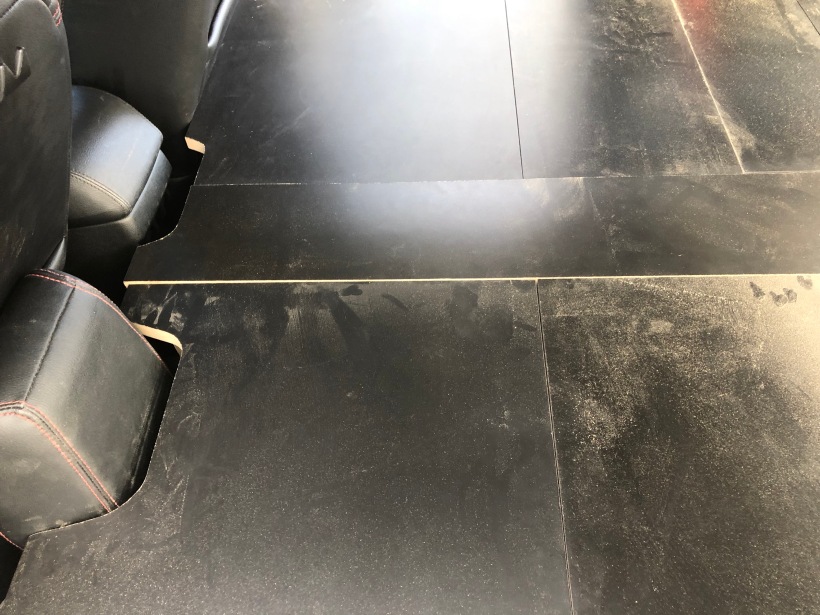 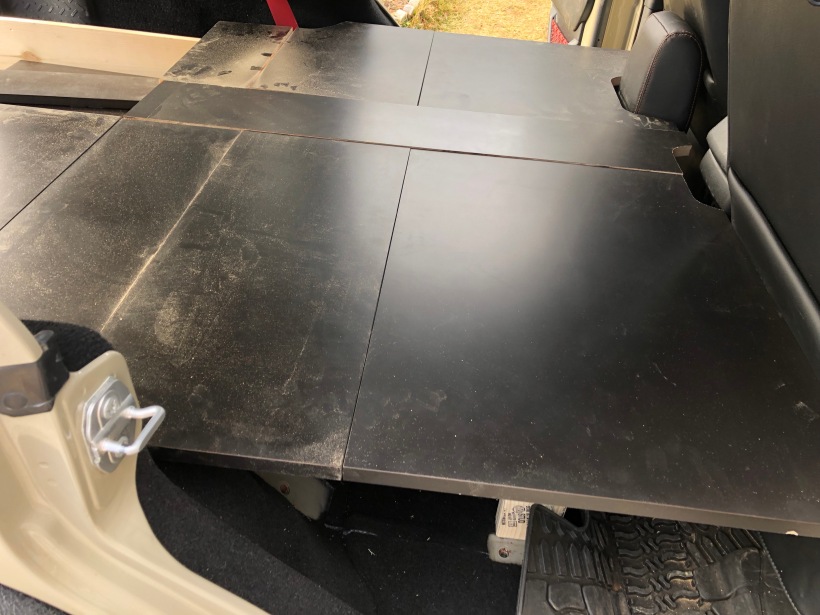 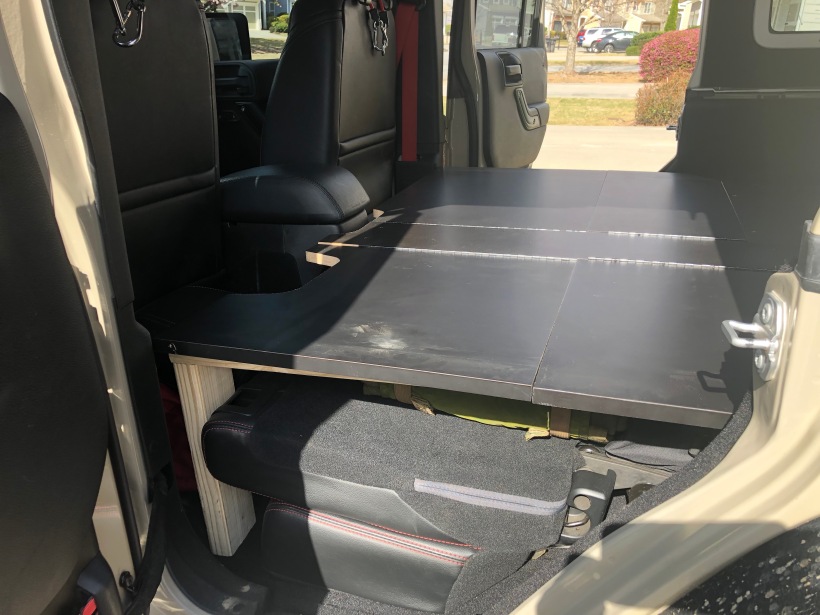 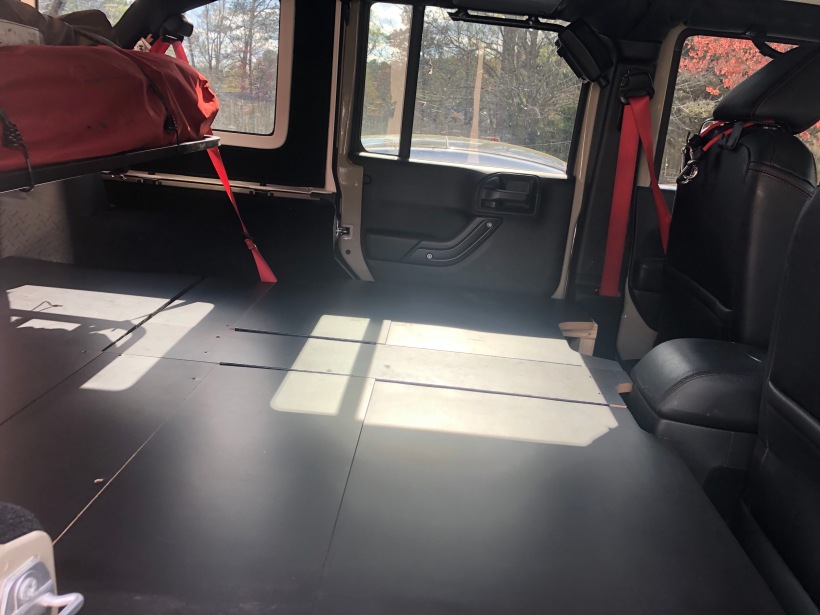 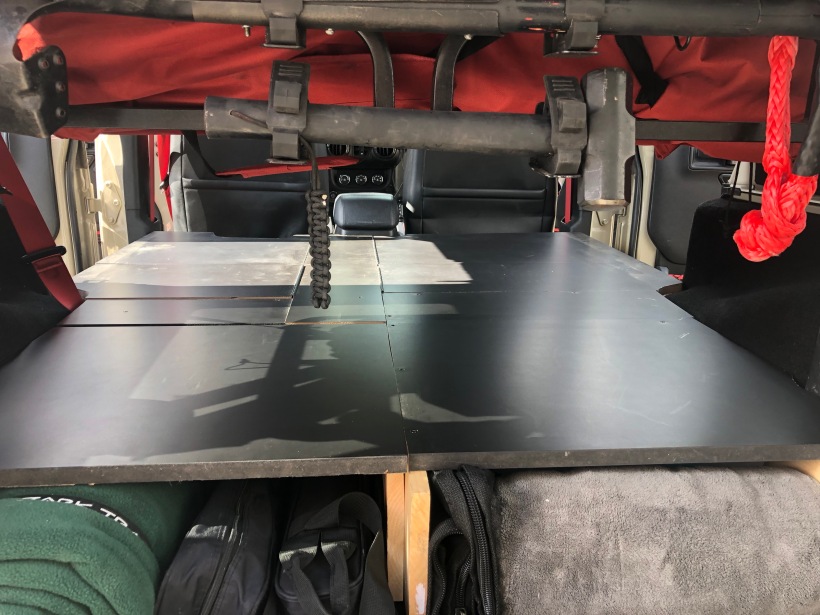 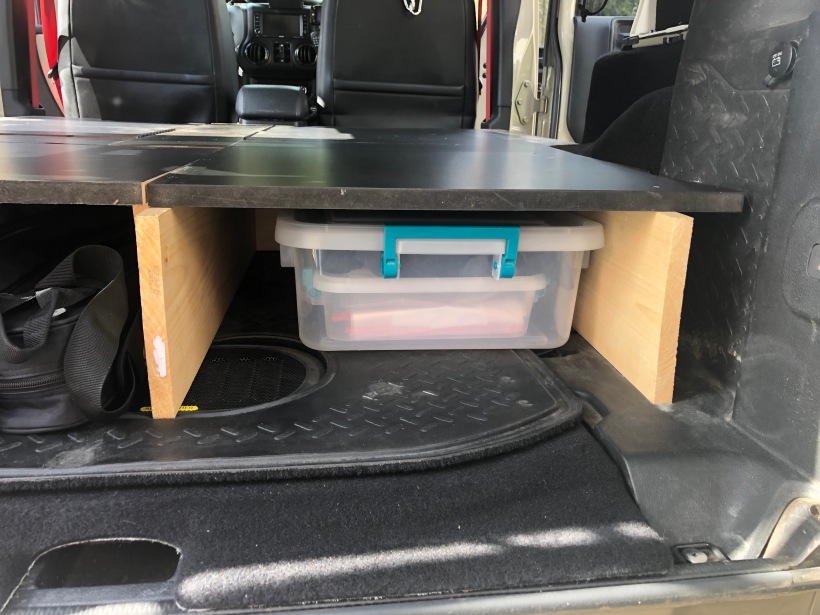 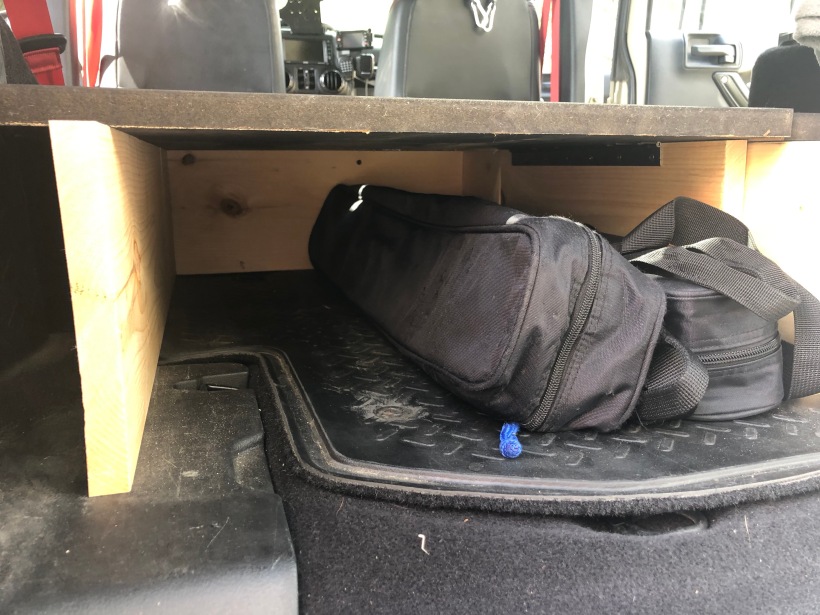 I added some interlocking rubber floor mats to add a additional layer of cushioning for sleeping, but that could easily be removed to folded into the smaller squares for storage. 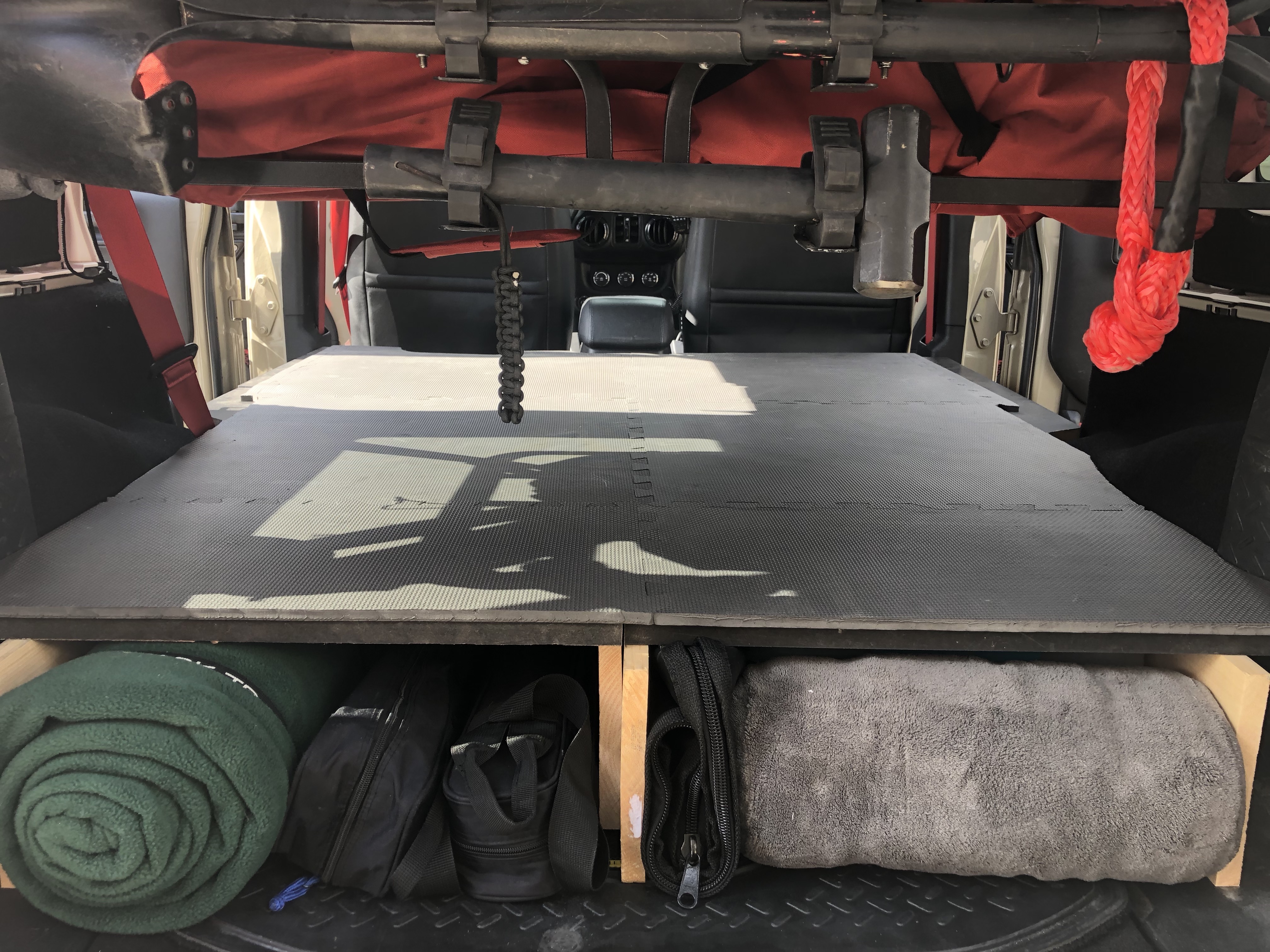 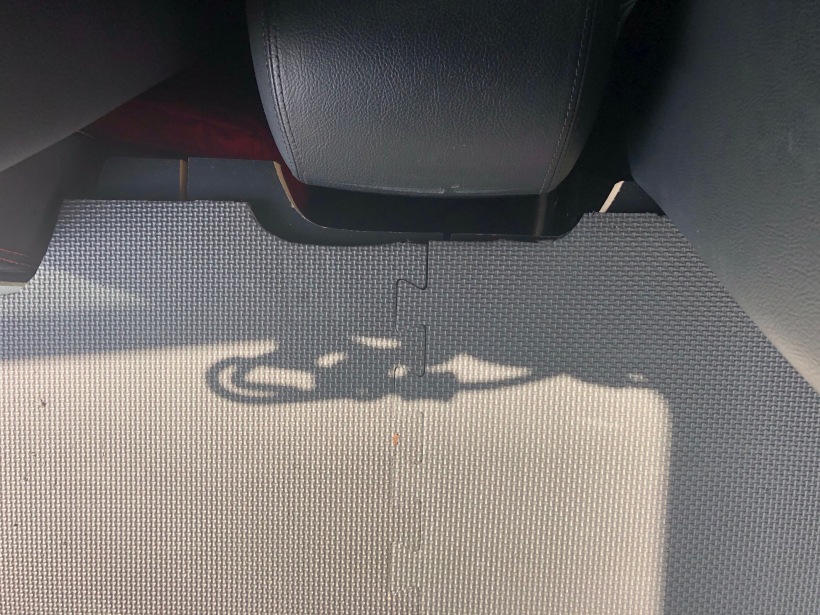 Next up was the NitePad Camping bed designed for the Jeep.  It’s sections zip together and also fold for storage or reconfiguration.  It’s about 1.5 inches thick and between it, the rubber mats, and our sleeping bags makes for a fairly comfortable night’s sleep.  You can find the NitePad on eBay. 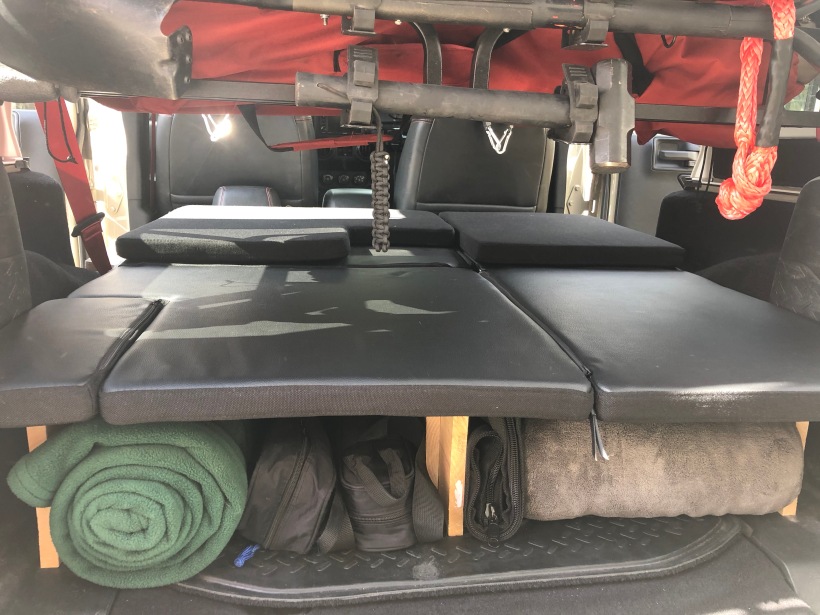 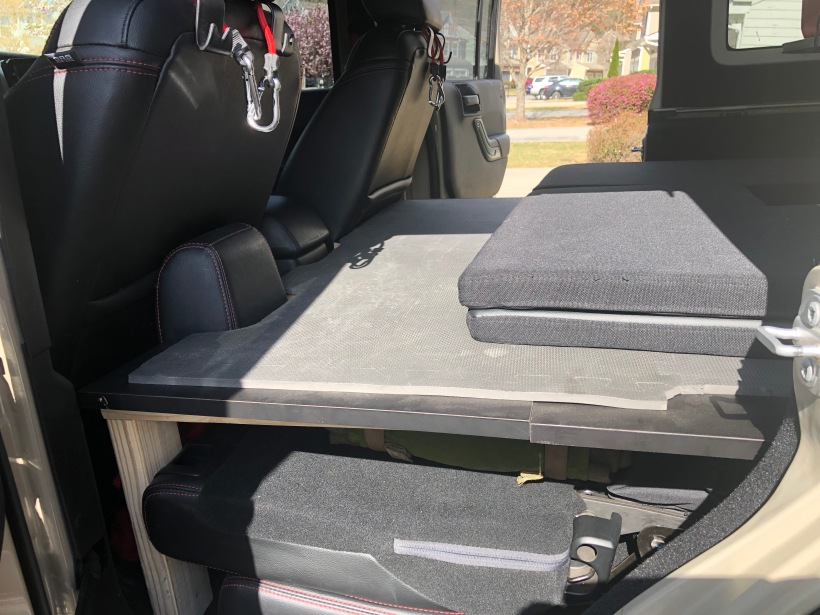 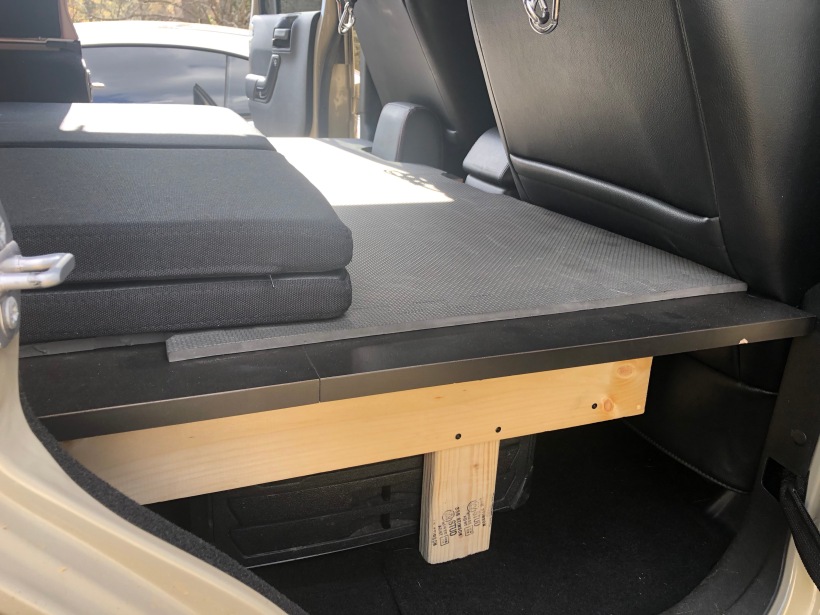 Seats fully forward and the NitePad folded completely out.  I am 5’6″ and don’t have any issues fitting.  I actually have several more inches once the seats are fully forward and reclined forward.  When we sleep, we lay with our heads towards the front and our feet below the rear cargo rack.  We have used the cargo rack to store our packs (clothes) so they are easily reachable/accessible. 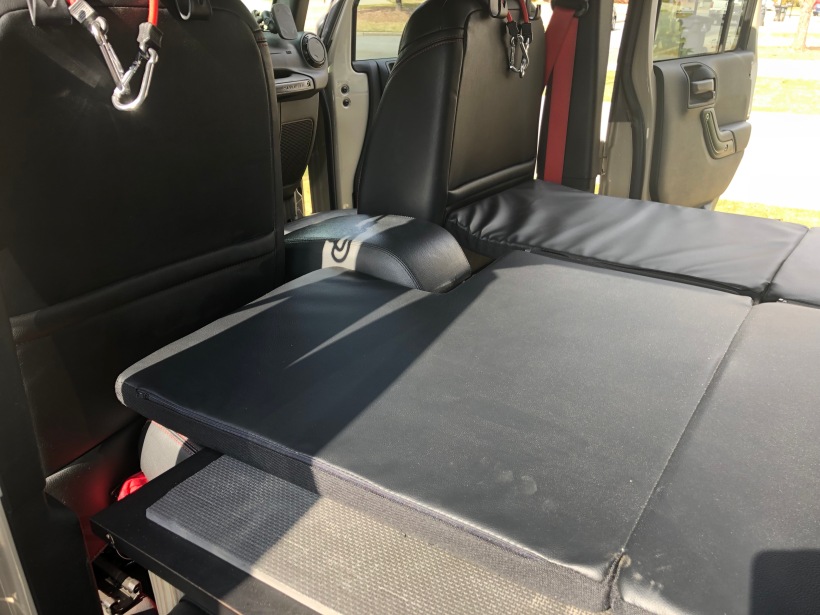 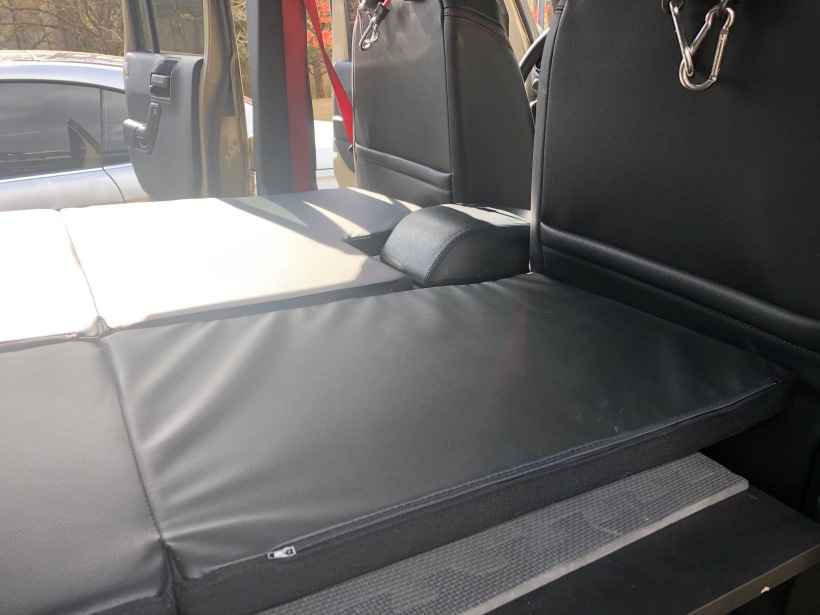 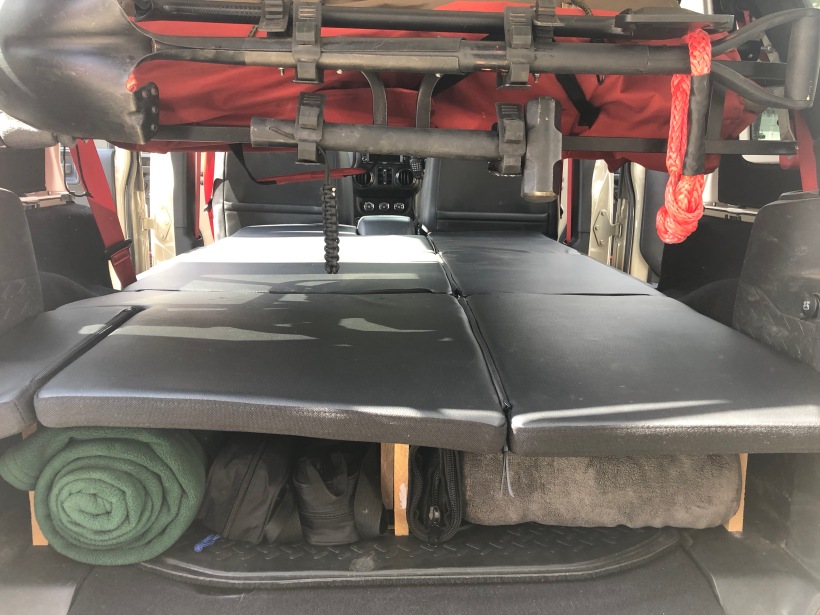 If I want to deploy the third seat, I flip over the left section, remove the support brace (which can be stored in the rear) and flip the seat up for occupation.  You can see in this first photo, that even with the seat folded down, I still have cargo room under this section. 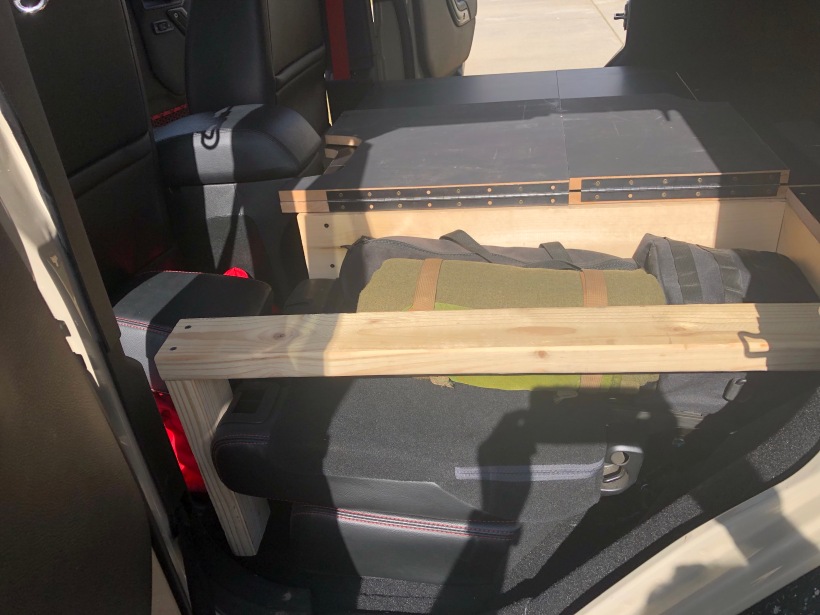 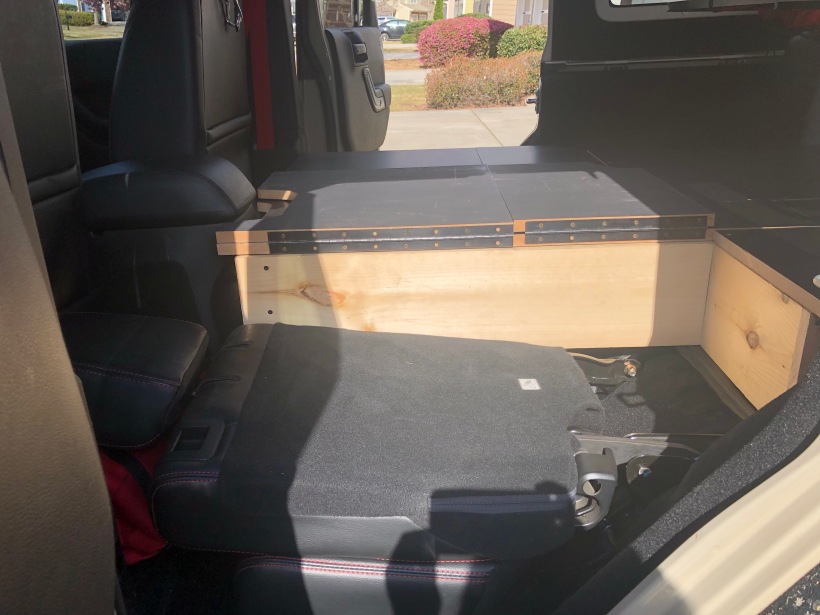 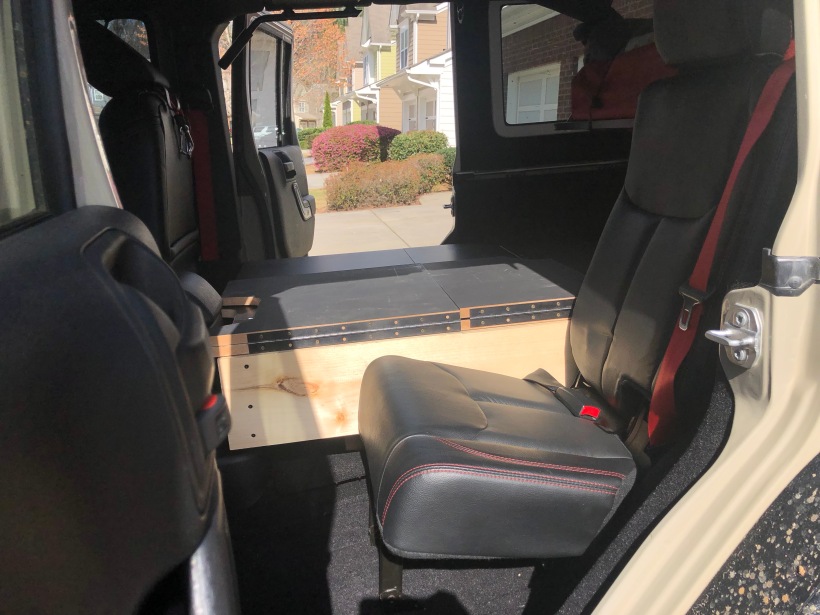 On the opposite side, I have more storage.  I currently keep a 250 piece tool set under here now, and still have more room for other items. 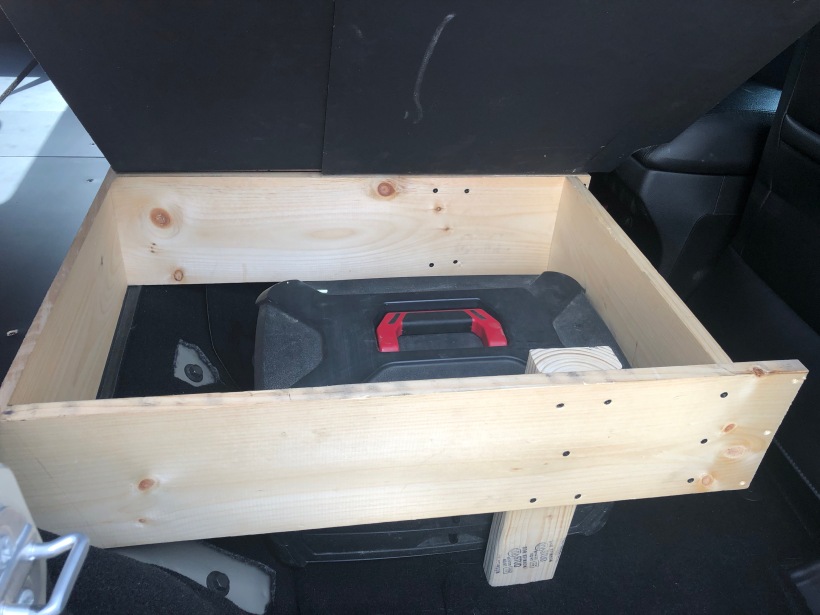 When we are going on an extended trip and need to bring the big cooler we can.  That rear deck section where the cooler is located is removable.  I can reconfigure the rear to hold the 45 qt ORCA Cooler mounted on a slide for easy access. 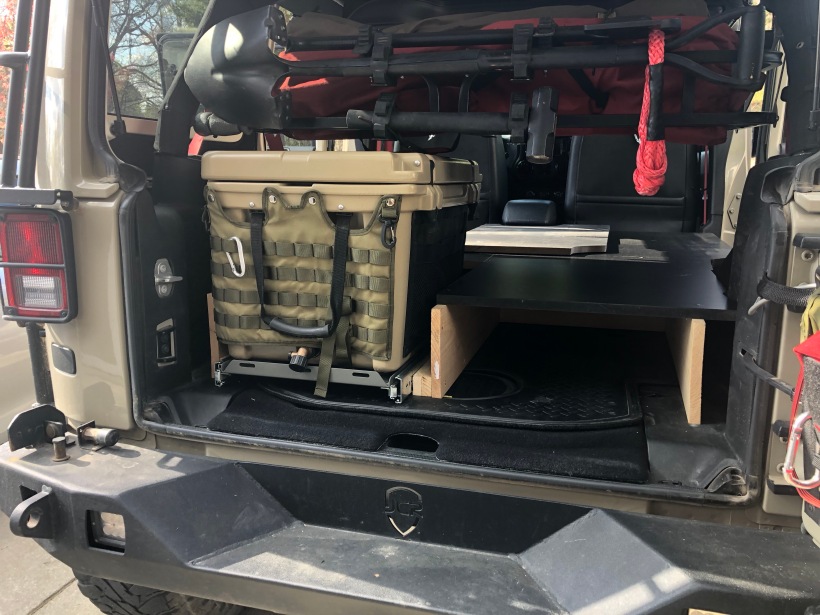 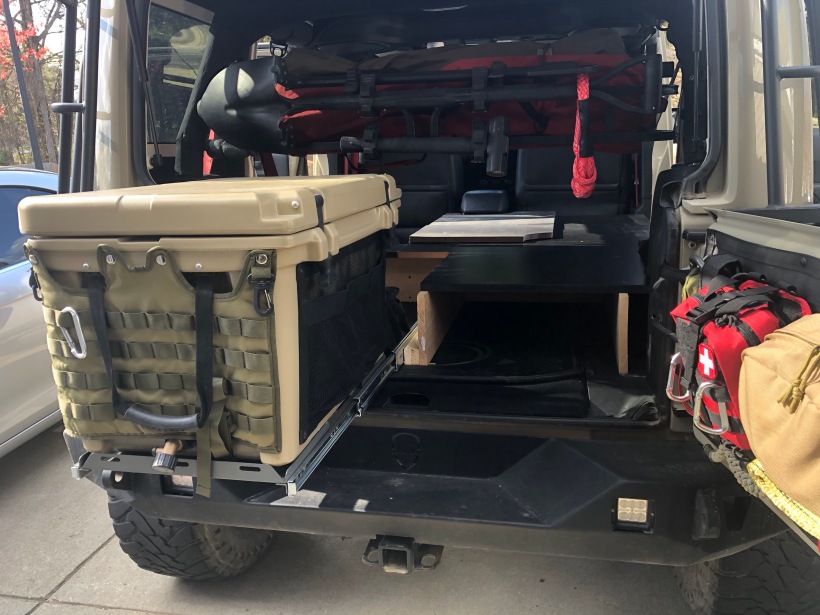 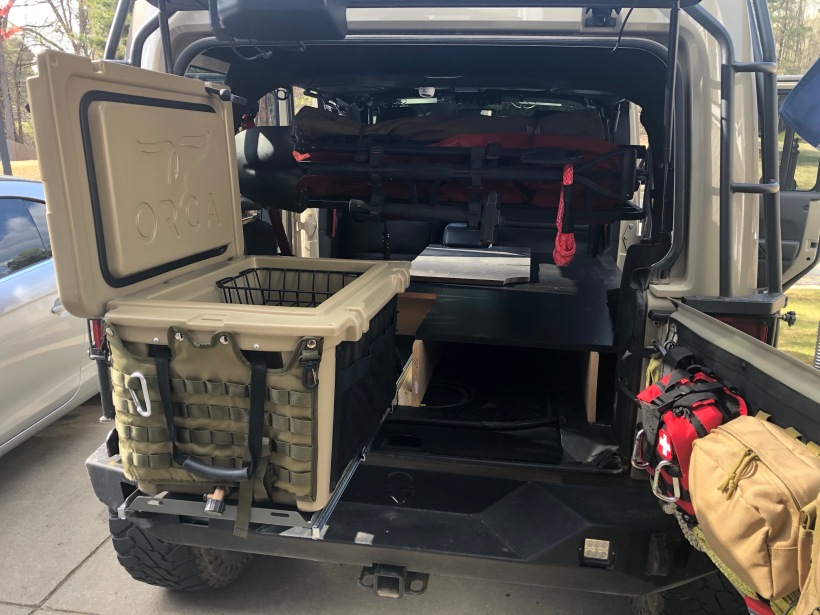 I am very pleased with the way everything turned out. At some point I want to dissemble it all so I can paint the supports and underneath the decking, but for now its fully functional!!   We have already camped out several times and enjoy the space we have.

As far as cost, I had all the decking boards from some cabinets, so I only had to purchase the 1 x 8’s and some wood screws ( oh, and a new cordless drill/screwdriver :-0).

Thanks for reading, and keep an eye out for future post…